I am an avid PUBG player. I have designed this series of mods to be useable in game and flexible for Titan 2 users. Generic rapid fire mods make it impossible to drive vehicles which leaves players in a tight spot. Every mod may be turned on/off in game using Mod Mode along with changing weapon firing rates. I have created an Interactive UI additionally which is capable of starting mods as active or de-active and set anti-recoil rates. The weapon firing rates are specific to the PUBG weapons which prevents issues seen in generic rapid fire mods where the weapon does not fire, fires sporadically, or appears to jam when users set their own firing rates. This also allows for quickly changing rates without guess work.

I have already added several features by request. If you have any ideas or wishes please let me know and I will keep you posted on the progress. If I am unable or unwilling to incorporate a request I will send you a PM explaining why.

Code: Select all
Auto-concentrate Fire
When not ADS or holding a grenade Concentrate Fire will activate
automatically when right trigger is pulled
This is baked into the script and cannot be accessed in Mod Mode

Code: Select all
------Mod Mode------
1. Hold LB and tap RB to enter Mod Mode (now easier to access)
2.Can actually be used in game quickly and with ease (I have played multiple games and the functionality is smooth)
3. Inhibits button presses while user is adjusting mods so the player does not perform in game actions
4. Rumbles to notify user of mods being on/off (2 Rumbles for On and 1 Rumble for Off)
5. Number of rumbles when changing weapons indicates which weapon is selected for Rapid Fire

------Recent Fixes------
[b]Major Update:[/b]
1.LED now turns off in Mod Mode
2.When in Mod Mode the weapon selected shows on the Titan 2 display
3.When mods are turned On or Off the display shows O (on) or F (off)
4.Number of firing rates reduced to 6 and weapon selection removed from GtunerIV menu
5.Weapon firing rates have been massively improved (I had been overthinking rapid fire)
6.Fixed moon walking issue when anti-recoil is on

------Helpful Tips:------
1. PRINT OUT THE MOD REFERENCE BELOW!!! It allows you to know which weapon is set for your primary and secondary weapons.
2. Set both primary and secondary weapons to S12K when waiting to start a game. Weapons can always fire slower, but often experience issues when the fire rate is higher (Weapon doesn't fire or fires slowly). The S12K seems to allow most weapons picked up to fire correctly and allows players to adjust fire rates later.
3. If the grenade is the first thing you pickup press right D-pad so that the Mod system knows you are holding a grenade
4. Don't underestimate a pistol. Setup the fire rate for the pistol you are carrying. It can be a matter of life or death in game.
5. You do not need to wait for the vibrations. If you know you are on the third weapon and you want to select the Vector, tap X 3 times and turn off mod mode. When you re-enter mod mode you may experience lingering vibrations from the combo being stopped early.
6. If you have the primary mod Rapid Fire on, but primary weapon Rapid Fire off then your primary weapon will not rapid fire. Your secondary weapon will Rapid Fire. The primary mods are accessible through the D-pad. If you turn the primary mod Rapid Fire off, neither weapon or pistols will rapid fire.
7. Pistols will automatically use Rapid Fire when the primary mod Rapid Fire is on. I may add a way to change this, but it is unlikely. Don't hold the trigger, just tap it.
8. Hold or tap Y to re-pin and uncook a grenade. Changing weapons or disarming yourself puts the grenade back in your inventory. DO NOT LET GO OF THE TRIGGER UNTIL IT IS UNEQUIPPED
9. Set one weapon to not use Rapid Fire. Switch to that weapon before jumping in a vehicle. This is a little easier than turning rapid fire off, albeit not much easier.
10. Don't get cocky... XD

Below is a quick reference to use the Mod Mode in game. 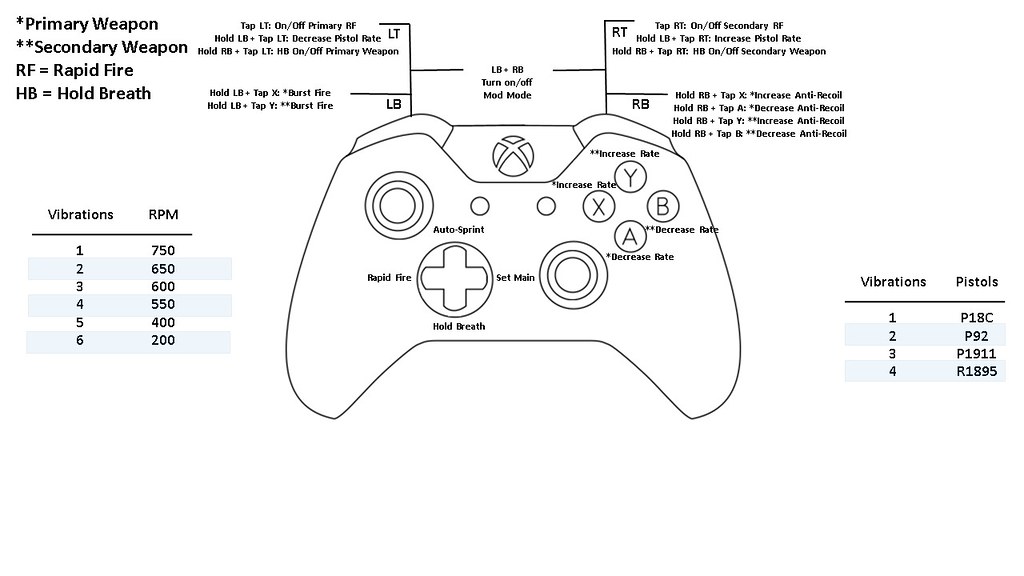 Sounds really interesting. I’ll give it a try and let you know.

Very interesting and thank you for sharing your script with us.

In the next update, add the link to this topic in the DOC URL field on the publishing form.
ConsoleTuner Support Team

So when I started this I was not so great at coding. I have revamped the entire system and everything not only works, but the code is clean enough to read and reuse or change if needed. There is some unnecessary code that I realized later I didn't need and will eventually weed out, but so far this is 100% improved. Everything now works appropriately and more features have been added. I'm currently working on uploading and updating this post.

I also kind of want to apologize to everyone who was using the old one. There were a lot of issues. It took me a minute to understand how GPC works. I promise good results with this one. I have had no issues, but if anyone has any... let me know. I'd like to fix it. Also any suggestions are welcome.
"Come to the Darkside... We have cookies!"

J2Kbr wrote:Very interesting and thank you for sharing your script with us.

In the next update, add the link to this topic in the DOC URL field on the publishing form.

I actually did this as well. I apologize that I couldn't figure out how to just update the old script when I rewrote it from scratch. I took down the old script and completely uploaded a new post, but linked it with this post and vice versa.
"Come to the Darkside... We have cookies!"

yesterday I saw the updated version on Gtuner IV. Great work you did. again, thank you for sharing with us.

I've noticed 2 issues which I'm going to address and a future goal for the anti-recoil. I would like the anti-recoil to be a GtunerIV selectable [baked] option that accounts for sensitivity and is specific to each weapon, but may be turned off in GtunerIV. [Issue 1] I have noticed as well the anit-recoil isn't working as well as I want it to work. [Issue 2] I need to verify, but I had a slight issue with the Tommy gun yesterday and I'm not sure if it is timing of the fire or coincidence.

[update] The anti-recoil has been adjusted to work correctly. I will need to experiment to figure out how to bake the anti-recoil into weapon selection (additionally allow to switch between baked and adjustable). I haven't noticed the issue with Tommy gun since the other day, but it may still exist. Let me know.
"Come to the Darkside... We have cookies!"

Thank you for this.
I will start testing and give feedback.

Thank you!
"Come to the Darkside... We have cookies!"

Xim Apex user here. I love this script, and I'm wondering if we can get more setup features inside the mod. I like to make all the adjustments in the config and then just turn on or off using my mouse and keyboard.

The way I have my setup, the button presses to turn on and off features is not easy. It's very easy to do on the controller, but just not with my setup. If we could get all the settings in the config it would be perfect for me.

Users browsing this forum: No registered users and 11 guests