You are here: start » t2 » compatibility_table 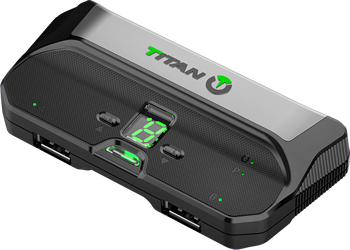 Wii and Wii U Controllers

All steering wheels controllers are supported by the Titan Two device as a HID Gaming Controller. Functionalities such as buttons, wheel position, pedals and so on can be used to play on any compatible gaming system. Some steering wheel models requires a particular initialization to activate special features, those are listed in the following table. More models will be gradually added to this list as we provide support for the respective special features.

Depending on the game, the wheel responsiveness can be improved by loading a GPC script on the Titan Two to remove the resting position deadzone and/or adjusting the sensitivity, as the following example:

The Titan Two is fully compliant with the HID standard, making it compatible with virtually any HID Gaming Device, such as Fight Sticks, Steering Wheels, Joysticks, Flight Controllers, Paddles, Game Pads and so on, including gaming devices that provides wireless connectivity by USB adapters.

All HID compliant keyboard and mice are supported by the Titan Two device, including the models that provides wireless connectivity by USB adapters. Other devices that acts like keyboard or mouse are also supported, such as foot switches.

Exclusive feature: The keyboard and mouse connected to your computer can also be used to play on any compatible gaming system via KM Capture interface, as if they were directly connected to the Titan Two device.