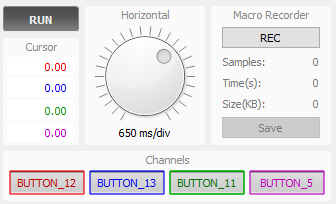 To start, create a New empty Macro file by clicking the GMK icon in the Macro Editor or load any saved gmk from the file explorer. From here there is two ways:

When you record the inputs from a Dualshock 4 it looks like that:

The first thing i do is to remove all the entries that i don't want to keep in the Macro and have a clear view to work:

Then use the toolbar to remove the selection.

With some games when you start from an empty file it's better to begin the Macro at 0 and start the inputs at 1ms like that:

That is not a wait time it's an event in the game. it depends on whether you hold the button when the macros starts but also depends on the game, most times you can start the Macro at 0 and the game will see it as an event.

The 2 points here are the nodes and can be used as a function to edit the Macros.

For example here i recorded a slow QCF2), this move use 2 buttons:

Just remove some parts to make the move quicker:

To convert this move into a QCB3), uncheck the down button and select the starting point of the forward button at 0:

Then check the Left button with a right click to enable the input and click the node icon to start the input:

Do so for all nodes enabled for the Right button to the Left button then remove the Right button's nodes by clicking the nodes icons. All that's left to do is to build and run to have your QCF converted into a QCB:

When a cutoff node is set, means the Macro will not overwrite the value for that input starting from this node until the next (if exists), meaning the value from the controller will be used instead.

Without interpolation the value from the first node is used until reach the next:

Both the cutoff node and interpolation are more useful when creating a Macro manually, if capturing via Device Monitor there is no much need of use these features.

To delete stuff just remove the used nodes. You can also remove or delete a selection with the toolbar. Recovering stuff once you screwed up is an issue because each time you build and run to test the Macro, the file is saved and the only way to go back is to make a backup of the work each time you are good!

Now that you have a Macro saved you need to write a script to run it, here is how to do:

You can't have two Macros running at the same time but you can run some Combos while a Macro is running. You can also convert your Macro into a Combo to use within a script from the toolbar.

1) Some more details: The Titan Two needs to be connected to the PC to use the Macro features from Gtuner IV. If you want to record your Macro without Gtuner IV you have to use a script. Luckly Scachi has published the necessary to facilitate the task! Here it is: MacroRecPlay
2) Quarter Circle Forward
3) Quarter Circle Back
4) i.e. Sticks and Triggers
t2/gtuner_iv/macro_editor_interface.txt · Last modified: 2020/04/28 04:13 by prototype